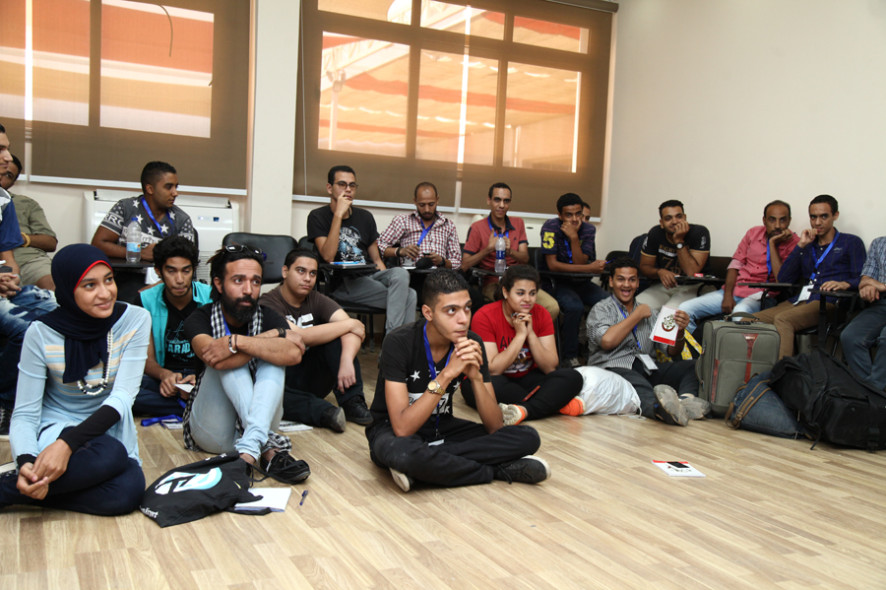 As part of the project, Culture and Theatre against discrimination, sub-granted by SouthMed CV, The Egyptian Feminist Union, in partnership with University of Cairo and the Egyptian Ministry of Youth, conducted a three-day forum from the 6th until 8th of August 2017 in Cairo’s Al Jazeera Youth Centre. In this forum, 180 young people participated in dialogues with experts from different fields, in multidisciplinary workshops, and attending performances about gender and religious-based discrimination.

The young people registered by applying to a call opened throughout June and July, came from the youth centres of Minia and Alexandria, which are administered by the Ministry of Youth. Young students from Cairo University also attended the forum.

A press conference was held on the 7th of August, with lectures given by Dr Gaber Nassar, previous president of Cairo University, Dr Ammar Aly Hassan, renowned writer and researcher, Mrs Randa Fouad, Writer and artist, Priest Mohsen Najem, Dr. Mona Makram Ebeid, expert in Political science, and Dr Houda Badran, Chair of the Egyptian Feminist Union. During this event, the audience was engaged in a debate about topics such as discrimination, gender equality, gender violence, religious extremism and cultural taboos.

The future activities of the project include a capacity building programme for theatre groups in Egypt, for this purpose a call was launched, and the selected beneficiaries will receive a grant to make a theatre piece in which to address the topics of gender and/or religious based discrimination. The call was closed on the 25th of August.

The EFU is continuously mobilizing artists and social experts to continue coaching workshops in Cairo University, and the Youth Centres of Minia and Alexandria.